"War looms in sixteen-year-old Tris’s dark dystopian world as disputes between the factions grow. Tris must now fight against all odds to discover the truth that can save her and the people she loves. Sides must be chosen, secrets will emerge – and the choices she makes will have devastating and unexpected consequences." taken from Goodreads 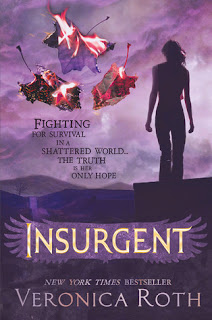 Just over a year ago now my very good friend Jenny over at Wondrous Reads sent me a new book that she thought was incredible and she thought I might just like it.  That book happened to be DIVERGENT.  I read it as soon as I could and fell absolutely in love with it.  It was easily my favourite book of 2011 and I've been dying to read the follow up.
That was why I was thrilled when Harper Collins chose me to be a part of the reviewing group for the book.  All of the reviewers were assigned to factions, as the characters in the book are.  I was put in the group of AMITY the peaceful.  I consider myself a fairly laid back, chilled person so found Amity quite the great fit.

I'll kick off with my cover review - I have to say I am not overly fond of the new UK covers.  For me they just don't have the appeal that the original style US covers do.
I do like the colouring - Its quite a passionate tone.

The story kicks off straight from where it left off.  It was a treat to jump back in and be reunited with Tris & Four.  I had missed the characters so much in our over a year separation, so it was great to know I hadn't missed any of their story.

I must say it took some perseverance for me to really get into the story.  I put this mostly on the fact that I put so much pressure on myself to adore that book, that it ended up being a bit of work getting in to it.  That said though I managed to read 165 pages in the first day, so I think that shows that I very quickly got into the story and wanted to keep reading.

I had a somewhat love / annoyance relationship with Tris in this instalment of the trilogy.  I loved the fact that she is imperfect and has somewhat dark thoughts at times, it makes her more real to me as a reader.  I always find these really strong noble female characters a bit difficult to connect with, not that Tris doesn't have moments of that too.
On the other hand Tris can be incredibly infuriating, she makes some very rash decisions that you want to scream 'why are you doing that?' but this of course makes for some very exciting tales.  Veronica's writing of Tris makes the story reading for me more immersive and I love that I can feel different emotions for the same character.

Insurgent is littered with so many 'dun dun dun' moments.  I was on the edge of my seat for most of the read thinking "oh what next?, how can that happen?, why did they say that?"
There were times I was left in absolute shock - how many books actually manage to do that now days??  Very few that I have found!!

This manages to come to a thrilling conclusion that left me satisfied despite its cliffhanger ending but just as eager to get to the final part of the story.  That said I have no idea how I will live without Tris & Four??

This is an incredible read that I felt had some hints of Lost TV show (I was addicted to that show).  It also had me thinking of a movie but I won't mention the title of that as that could be somewhat spoilerish!!

Published In The UK By Harper Collins Childrens Books