Allison Sekemoto survives in the Fringe, the outermost circle of a vampire city. By day, she and her crew scavenge for food. By night, any one of them could be eaten.

Some days, all that drives Allie is her hatred of them. The vampires who keep humans as blood cattle. Until the night Allie herself is attacked—and given the ultimate choice. Die… or become one of the monsters.

Faced with her own mortality, Allie becomes what she despises most. To survive, she must learn the rules of being immortal, including the most important: go long enough without human blood, and you will go mad.

Then Allie is forced to flee into the unknown, outside her city walls. There she joins a ragged band of humans who are seeking a legend—a possible cure to the disease that killed off most of humankind and created the rabids, the mindless creatures who threaten humans and vampires alike.

But it isn't easy to pass for human. Especially not around Zeke, who might see past the monster inside her. And Allie soon must decide what—and who—is worth dying for. taken from Goodreads 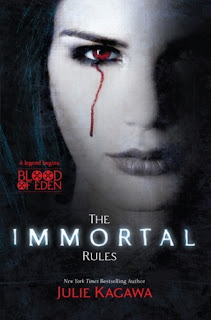 I heard about this at the Mira Bloggers event I was lucky to attend in March.  I've been meaning to read the Iron Fey series for what feels like forever.  So when I heard that a whole new series was being written I was so excited - I do like to be there at the start of a series and there was no way I was going to miss this one.

The cover is brilliant.  Very understated but tells you EVERYTHING you need to know.  I love the touch of the blood dripping from the girls eye - very chilling.

On starting the book I was instantly scared - the new world depicted is horrifying.  I felt unnerved that humanity has become what it is.
Allie is our main character and she has to fight for a very meagre existence on the streets avoiding the predators that are hunting them.  She despises vampires the most, that is until one day she has the hard decision of either dying or becoming one of them.  The thought of having to become the thing you hate the most is awful and reading Allie's transition is tough.

She does have an incredible relationship with her creator though - I felt it was like the vampire equivalent of Buffy & Giles - that's a show I adore, so worked amazingling for me.

It was incredible to read of more traditional vampires again, that are all essentially evil and cannot be reformed.  It really did read like they are something to be truly scared of - how they were originally meant to be!!

Something that gets mentioned in the books is the Vampire cities where the vampires live - these really weren't explored in the book which disappointed me greatly.  I really hope they get more coverage in the next part of the story.

I understand that Julie was very hesitant to write a vampire story, but I am so pleased she went against that and started a series after all.  This is a fantastic first part and I'm gagging to see what comes next!!!

Published In The UK By Mira Ink