In late March Mira Ink held their very first bloggers event.  To my absolute shock they invited me along, plus made room for my co-reviewer aka my Mum Sue!  This brought problems for my Dad, as he now how TWO very excitable ladies in the house - whoops!! 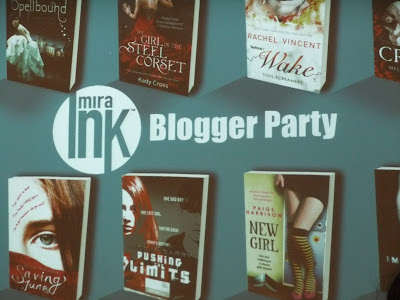 We'd never been to the area that the Mira offices are in, so decided to go up a little earlier and get a bit of shopping in.  Literally any excuse!!  Apart from spending money I didn't really have we also saw a celebrity doing the school run - I had to hold Sue back from seriously fangirling - anyone would think I was the Mum.

Eventually it was time to make our way to the offices, where we were given such a wonderful warm welcome from the ladies that run the show.
We were given these super cool name badges so we all knew who everyone was - those things are so handy!  If only they could be used day to day!!
There was a fabulous array of food and drink on the table, that made my mouth water.  We were all nervous of being the first person to tuck in though - Everyone was on their best behaviour it seems.

On every chair in the room there was either a red or black bag - inside everyone was 7 books, sweets & nail varnish - Could this event get any better??  It did, but more on that later!!

Once everyone had arrived and all the extremely excited chatter had died down (slightly) the presentation of Mira's upcoming books started.  We are in for some MAJOR treats.... 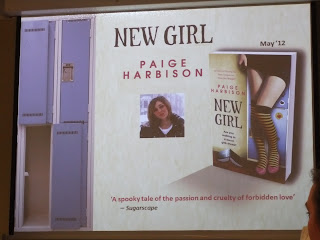 NEW GIRL By PAIGE HARBISON - They call me 'New Girl'...Ever since I arrived at exclusive, prestigious Manderly Academy, that’s who I am. New girl. Unknown. But not unnoticed—because of her.  Becca Normandy—that’s the name on everyone’s lips. The girl whose picture I see everywhere. The girl I can’t compare to. I mean, her going missing is the only reason a spot opened up for me at the academy. And everyone stares at me like it’s my fault.  Except for Max Holloway—the boy whose name shouldn’t be spoken. At least, not by me. Everyone thinks of him as Becca’s boyfriend…but she’s gone, and here I am, replacing her. I wish it were that easy. Sometimes, when I think of Max, I can imagine how Becca’s life was so much better than mine could ever be.  And maybe she’s still out there, waiting to take it back.  This is a modern retelling of Rebecca - Due For Release in MAY 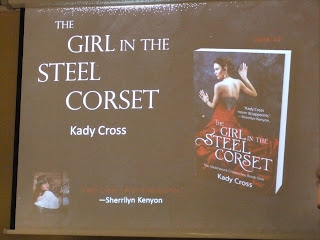 THE GIRL IN THE STEEL CORSET By KADY CROSS - In 1897 England, 16-year-old Finley Jayne is convinced she's a freak. No normal Victorian girl has a darker side that makes her capable of knocking out a full-grown man with one punch. Only Griffin King sees the magical darkness inside her that says she's special . . . that she's one of "them."  This one was in our bag of goodies.  Its been on my wish list for FOREVER, so super happy to have this.  Sue has already reviewed this one HERE - Due For Release In June 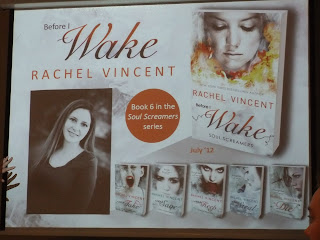 BEFORE I WAKE By RACHEL VINCENT - I died on a Thursday—killed by a monster intent on stealing my soul. The good news? He didn’t get it. The bad news? Turns out not even death will get you out of high school…Covering up her own murder was one thing, but faking life is much harder than Kaylee Cavanaugh expected. After weeks spent “recovering,” she’s back in school, fighting to stay visible to the human world, struggling to fit in with her friends and planning time alone with her new reaper boyfriend.  But to earn her keep in the human world, Kaylee must reclaim stolen souls, and when her first assignment brings her face-to-face with an old foe, she knows the game has changed. Her immortal status won’t keep her safe. And this time Kaylee isn’t just gambling with her own life…. I haven't read any of this series, but am told I am hugely missing out so I really must get on the bandwagon.  There is one more book to come in the series called 'WITH ALL MY SOUL' - Due For Release in July 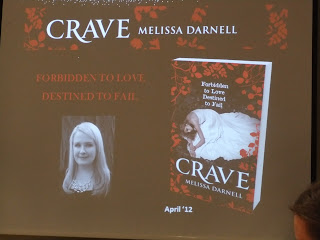 CRAVE By MELISSA DARNELL - When Savannah Colbert returns to school after a mystery illness, the fact that she has changed is clear to everyone. None more so than every school girls golden boy Tristan Coleman. Ever since their first kiss in fourth grade, Savannah and Tristan have been cruelly and inexplicably banned from associating with each other. Now, as the pair navigate the tricky social life of high school, the truth is about to be revealed.   As Savannah learns of their paranormal ancestry and Tristan deals with the repercussions of her new powers, the relationship they have been denied for so long becomes utterly irresistible and all consuming. Like Romeo and Juliet centuries before them, Savannah and Tristan’s love is destined to fail; and Tristan’s powerful magical family, the Clann, are watching - This is out NOW 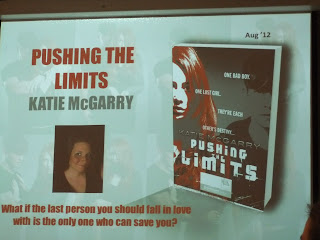 PUSHING THE LIMITS By KATIE McGARRY - No one knows what happened the night Echo Emerson went from popular girl with jock boyfriend to gossiped-about outsider with “freaky” scars on her arms. Even Echo can’t remember the whole truth of that horrible night. All she knows is that she wants everything to go back to normal. But when Noah Hutchins, the smoking hot, girl-using loner in the black leather jacket, explodes into her life with his tough attitude and surprising understanding, Echo’s world shifts in ways she could never have imagined. They should have nothing in common. And with the secrets they both keep, being together is pretty much impossible.  Yet the crazy attraction between them refuses to go away. And Echo has to ask herself just how far they can push the limits and what she’ll risk for the one guy who might teach her how to love again - This is the first in a series.  Book two will be called DARE YOU TOO.  Katie kindly took the time to film a video message for us attending the event too!! - Due For Release in August 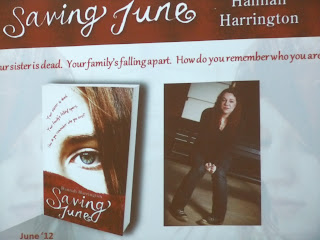 SAVING JUNE By HANNAH HARRINGTON - When her older sister commits suicide and her divorcing parents decide to divide the ashes, Harper Scott takes her sister's urn to the one place June always wanted to go: California. On the road with her best friend, plus an intriguing guy with a mysterious connection to June, Harper discovers truths about her sister, herself and life.  - This is a debut release.  The book comes with a full track listing in the back, which would help set the mood of the book.  We also had a video message from Hannah. - Due For Release In June 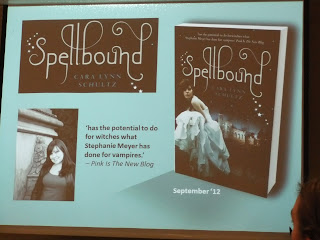 SPELLBOUND By CARA LYNN SCHULTZ - Life hasn't been easy on sixteen-year-old Emma Connor, so a new start in New York may be just the change she needs. But the posh Upper East Side prep school she has to attend? Not so much. Friendly faces are few and far between, except for one that she's irresistibly drawn to Brendan Salinger, the guy with the rock-star good looks and the richest kid in school, who might just be her very own white knight.  But even when Brendan inexplicably turns cold, Emma can't stop staring. Ever since she laid eyes on him, strange things have been happening. Streetlamps go out wherever she walks, and Emma's been having the oddest dreams: visions of herself in past lives visions that warn her to stay away from Brendan. Or else. - This was described as a witchy Gossip Girl, sounds pretty cool to me! - Due For Release In September 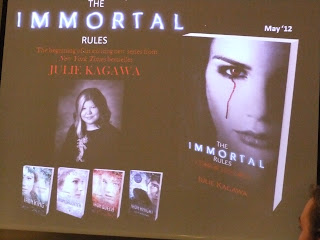 THE IMMORTAL RULES By JULIE KAGAWA -  Allison Sekemoto survives in the Fringe, the outermost circle of a vampire city. By day, she and her crew scavenge for food. By night, any one of them could be eaten. Some days, all that drives Allie is her hatred of them. The vampires who keep humans as blood cattle. Until the night Allie herself is attacked—and given the ultimate choice. Die… or become one of the monsters. Faced with her own mortality, Allie becomes what she despises most. To survive, she must learn the rules of being immortal, including the most important: go long enough without human blood, and you will go mad. Then Allie is forced to flee into the unknown, outside her city walls. There she joins a ragged band of humans who are seeking a legend—a possible cure to the disease that killed off most of humankind and created the rabids, the mindless creatures who threaten humans and vampires alike. But it isn't easy to pass for human. Especially not around Zeke, who might see past the monster inside her. And Allie soon must decide what—and who—is worth dying for. - This I have already read and LOVED, its incredible and I can't wait for everyone to have read it too.  I'll be taking part in the UK blog tour for this coming soon - Due For Release In May


So if we weren't excited enough by all the bookish news and cakes, next up we got to have a video call (Skype) with Julie Kagawa!!!!  This could have potentially gone really bad as we all know how unreliable technology can be, but shockingly it went amazingly.  Here's my cliffs notes on our group conversation: 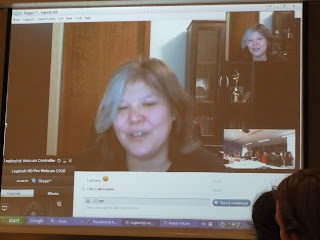 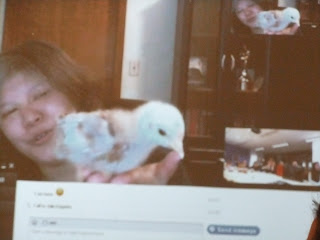 Julie also showed us one of her chicks - they are ADORABLE!!!


After our conversation of EPIC we continued our mingling for quite a while.  Its lovely to be in a room of people that share the common love of books.  Its a good oportunity to geek out and basically be yourself.


Our evening then sadly came to an end, but I can honestly say it was a wonderful evening.  Seeing as the ladies at Mira had never held an event before they seriously knew how to treat us well.  THANKS TO ALL AT MIRA INK!!!