Review - The Intern By Dillon Khan

When Jay Merchant lands an internship for the best job in music television, he is given a backstage pass to the biggest gig of his life. The velvet rope to the biggest VIP parties and hottest celebrities has been lifted and now he's got to capture it on camera. But with only six months to turn his intern dream into a real job, does he have what it takes? It's time to face the music..  taken from goodreads 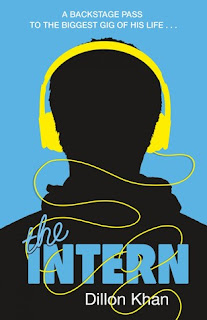 I hadn't actually heard of this book until Puffin the publishers asked if I would be interested in reading a copy.  I did a bit of bookish research and instantly loved the idea of the story and so jumped at getting a copy.

The cover is very cool and funky.  Its perfect fitting for the story and the time in which the story is set.

The story is set in 2000 - this is back when I was 15 turning 16 and so brought back so many memories for me.  This really was a time that I LOVED everything music and TV, so could relate to so much of what the lead character Jay was talking about.
So Jay has left uni and is desperately trying to get a job in the media industry.  He sets his sights on working at THE BEAT.  Jay literally goes all out to secure an internship working there and so the story goes on.  I loved reading of the lengths he goes to.

The internship leads not only to hard work, but some hard play.  Having had a somewhat not so secret longing to be included in the VIP, celebrity circuits I could really enjoy these tales of fun and scandal.  Its all the sorts of stuff that you imagine happening, but can barely dream of witnessing.
I've always had a really keen interest in the media industry, but being kind of shy it would never have worked me.  Reading this, even though not gospel truths on the industry (I must remember its fiction!) has made me feel more dubious and even kind of freaked at the idea of it.  If even half of this stuff really goes on, then I know I wouldn't last long!!

All the chapters titles are song names - this is just awesome.  I recognised the majority of them, but there are definitely a few I need to look up.

I was stunned at some of the details Dillion managed to put in.  This as I mentioned brought up so many memories for me, all I can think is Dillon either has an amazing memory or impeccable researching skills??  This does lead to a slight concern for me in that for some younger readers they aren't going to have a clue what the TV shows or music being spoken about are - I really hope this doesn't limit the possible fan base for the book.  That's probably just me being harsh on readers out there though!!

The touches of having a few real life celebrities mentioned in the story, made it feel a whole lot more real than most stories I read.  It was kind of like reading a reality show - something I had never considered before, but something that works really well.
There were a few questions I was left with, but nothing majorly important!!
This is such an enjoyable fun read.  It really was impossible for me to put down at the end as I couldn't go to sleep without knowing how things were going to end.  I hope to see more from this world in the future.

This Can Be Purchased HERE and from all good book retailers
Posted by District YA at 09:00