Have you ever had the feeling that you've lived another life? Been somewhere that has felt totally familiar, even though you've never been there before, or felt that you know someone well, even though you are meeting them for the first time? It happens. In 2073 on the remote and secretive island of Blessed, where rumour has it that no one ages and no children are born, a visiting journalist, Eric Seven, and a young local woman known as Merle are ritually slain. Their deaths echo a moment ten centuries before, when, in the dark of the moon, a king was slain, tragically torn from his queen. Their souls search to be reunited, and as mother and son, artist and child, forbidden lovers, victims of a vampire they come close to finding what they've lost. In a novel comprising seven parts, each influenced by a moon - the flower moon, the harvest moon, the hunter's moon, the blood moon - this is the story of Eric and Merle whose souls have been searching for each other since their untimely parting. taken from Goodreads 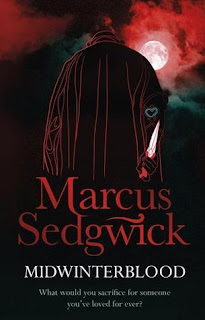 I was lucky enough to meet Marcus last year, admitedly I hadn't read any of his books but had heard of him. We were at a Twilight convention where a few authors were also attending and Marcus told us a little about his self and how he'd come to write Midwinterblood.

Marcus decided to take his self to one of the small Scottish Islands to write Midwinterblood as he'd been trying to write this book for sometime and wasn't having a lot of luck, there he managed in weeks to write this very clever book.

Midwinterblood in my opinion is literally back to front with the last chapter being an epilogue. It starts in the year 2073 and you go into the story feeling that your at the end of the story, but how did we get here, and why? I wasn't sure at this stage if this was the book for me, but felt intrigued enough to want to read the second chapter.

Part two 2011, We have a little more information, but more mystery, more questions??

I'm not sure if a younger YA would understand this, and in my opinion the book is better aimed at the older YA, or in my case YA's mummy!!!!

I really liked this unusual addictive book, and don't feel i've read anything quite like this before, would really recommend.

This Can Be Purchased HERE and from good book sellers

Review By SUE
Posted by District YA at 09:30