"They say I'm evil. The police. The newspapers. The girls from school who shake their heads on the six o’clock news and say they always knew there was something not quite right about me. And everyone believes it. Including you. But you don't know. You don't know who I used to be.

Who I could have been.

Awaiting trial at Archway Young Offenders Institution, Emily Koll is going to tell her side of the story for the first time.

Heart-Shaped Bruise is a compulsive and moving novel about infamy, identity and how far a person might go to seek revenge" Taken from Goodreads 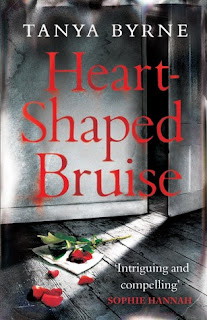 Something that concerned me when I starting reviewing books was what happens if I review the book of an author that I kind of know, I quickly told myself off for being daft that would never happen.  Well a lovely surprise for me was that I actually struck up quite an awesome friendship with Tanya (check her out on twitter guys @tanyabyrne - she is amazing!!)  So my first concern came back into play on starting this - I'm thrilled to say I had nothing to worry about!!!

The cover is gorgeous.  I don't think it says a whole lot about the story, but it would be incredibly difficult to sum this book up in an image. It has a somewhat sinister look to it, so definitely shows the right set up.

From reading the blurb I was somewhat concerned about the character Emily, who's point of view you are reading from.  It really doesn't sum her up as the nicest person in the world and made me kind of judge her straight away in thinking that I really should dislike her.  Imagine my absolute shock when I started to read the story and found myself relating to Emily.  Now I'm not declaring that I have been in a youth offenders unit or anything like that, but I have been through the whole process of meeting with councillors trying to deal with issues.  I could so relate to Emily's views on what seemed like stupid, annoying questions and so making her act even more irritably.

The more I read of the sessions and Emily's thoughts the more intrigued I was getting.  I wanted to know the back story and how we had got to where we were and so my reading time kept increasing.  The story develops at a great speed, letting you know the right things at the right times.

I didn't expect to find myself giggling along with the book and so was very pleasantly surprised with some funny moments.  These were serious black humour moments and I did feel a little guilty laughing, but I love the fact that some humour can be brought in to moments of intense seriousness.

I found myself making some realisations of the characters and possibly the reason behind the actions of Emily.  I don't want to say too much but I will definitely be asking Tanya if my wondering is accurate!!

The end of the story was beautifully put together.  I was left with a few little queries on what happened with some characters, but at the same time felt actually it wasn't important to know about them.  The priority was to know about Emily and this was accomplished perfectly.

This was an absolutely fascinating read, on a subject that isn't entirely comfortable.  Tanya did an amazing job of telling the story of Emily and has left me wanting more from her - soon I hope!!

Published In The UK By Headline