"The monster showed up after midnight. As they do.

But it isn't the monster Conor's been expecting. He's been expecting the one from his nightmare, the one he's had nearly every night since his mother started her treatments, the one with the darkness and the wind and the screaming...

This monster is something different, though. Something ancient, something wild. And it wants the most dangerous thing of all from Conor.

It wants the truth." taken from Goodreads 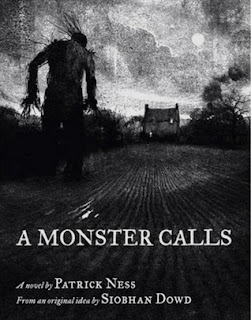 I'd seen this book around for a while and although being intrigued by it, I hadn't taken the plunge and bought a copy.  Well thank god for Bluewater Waterstone's YA bookclub - it was picked as the September read and so I finally HAD to buy & read it.

The cover and all the illustrations inside are just amazing.  Its all so atmospheric and sets the tone for the book so well.  I love that you get to see details of whats happening, but you don't get every tiny detail, so it still gives your imagination time to build on the world.  I understand a new adult version of the book has been released without the pictures, I really feel this will make the story lose some of its impact.  I also think that the pictures in no way make the book child like, so removing them to make it more adult doesn't seem quite right to me.

From the start of this story you know you are in for a heart breaker.  The lead character Conor is going through so much and no matter what happens you feel that things just seem to be getting worse.  Its not long into the book that you meet 'the monster' and Conor's casual attitude about meeting this thing makes it all the more evident how resigned he is to bad stuff happening.

I love that this book offers so much in so many ways to all of its readers, be it young or old.  It really is incredible that a story can be interpreted by different readers in the way it is meant to for them.  I can imagine children being enthralled by the creepy monster, teens relating to Conor, adults picking which senior characters they agree with.

I thought it was amazing that the meaning behind the story can also be read in the way that you need it, it could be a horror or it could be a psychological tale.  On this front I could almost see factors that related to Pans Labyrinth.  To this day I'm not completely sure what in that film was real or not and this book definitely has some of that going on.

This is a truly clever, insightful & somewhat tragic story that anyone who has suffered a loss in their life could relate too.   It also acts as a great manual for anyone going through a traumatic time, a cautionary tale of the ways to handle it and the ways not to!!

Published In The UK By Walker Books

This Can Be Purchased Here And From All Good Book Sellers

Here is what Bluewater Waterstones Bookclub thought of the book
Posted by District YA at 09:30