More than anything, Tom Raines wants to be important, though his shadowy life is anything but that. For years, Tom’s drifted from casino to casino with his unlucky gambler of a dad, gaming for their survival. Keeping a roof over their heads depends on a careful combination of skill, luck, con artistry, and staying invisible.

Then one day, Tom stops being invisible. Someone’s been watching his virtual-reality prowess, and he’s offered the incredible—a place at the Pentagonal Spire, an elite military academy. There, Tom’s instincts for combat will be put to the test, and if he passes, he’ll become a member of the Intrasolar Forces, helping to lead his country to victory in World War Three. Finally, he’ll be someone important: a superhuman war machine with the tech skills that every virtual-reality warrior dreams of. Life at the Spire holds everything that Tom’s always wanted—friends, the possibility of a girlfriend, and a life where his every action matters—but what will it cost him? 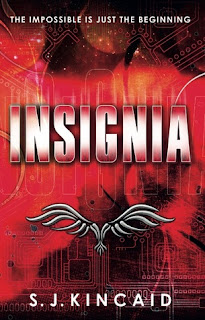 I must be honest - before starting this I hadn't really heard anything about the book.  Although I happily describe myself as a geek and have been known to be a gaming fan, but I've never been into fighting games or anything 'war' like so I wouldn't have actively looked for a book using aspects like that.  Well going by this book I have been seriously missing out!!

The story is set in our future (not so distant by the sounds of it) and we are in world war 3.  The difference though is that wars are no longing held on earth, but in parts of space.  The only fighting that really happens is in game form and that is where our lead character Tom comes in.

His life is pretty miserable - he moves frequently with his gambling Dad and the only thing he really has is his incredible ability to play video games.  Somehow he is head hunted through his gaming prowess and given the most amazing opportunity - to study and become part of the war effort.

This is where Tom really comes into his own.  He finally feels he belongs somewhere and is doing what he is meant to do, and so the story really begins.

I LOVE that this book takes on board that technology and gaming is our future and could quite possibly be the thing that keeps us safe in the future.  So much bad stuff is written about kids and their addiction to games, which yes can go too far but it doesn't seem to be considered that it actually gets people thinking and making them think in different ways to what they normally would.  The situations you face in a game tend to be totally different to what you see in day to day life.  Gaming really shouldn't be frowned upon as much as it seems to be and I loved the service this book pays to that.

Generally I am a fan of paranormal fiction, so books with a science fiction element don't get much of a look in.  This was in lots of ways so exciting, in that reading this seems somewhat feasible and that's quite a thrilling thought - that what you are reading is kind of possible!!

Another thing I LOVE is that the characters are flawed.  So many books you read are about these perfect people that are selfless and generally wonderful.  I'm not saying that these characters are bad, but they aren't saints and that makes them so much more relate able.

I was trying to think what I could compare this to and although its very unique I could see it as a Technology based Harry Potter, with a dash of Top Gun - basically put an incredible combination !!!  This is an Awesome start to what I truly hope continues to be an amazing series.

Published In The UK By Hot Key Books

This Can Be Purchased HERE and from good book retailers
Posted by District YA at 08:00