Today I got an email from those lovely folk at Harper Collins telling me about an exciting new release coming in October.  I Just HAD to share the news with you guys!!

The book is called THE DARK HEROINE By ABIGAIL GIBBS 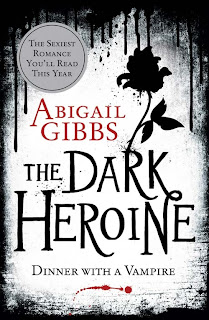 This is the news that was shared with me -


As the publishing industry continues to evolve in the face of the digital age, HarperFiction has discovered 18 year-old online sensation and debut novelist Abigail Gibbs, who has been posting The Dark Heroine: Dinner with a Vampire chapter by chapter on Wattpad.com. Having clocked up a phenomenal 17 million reads so far and amassed a huge global fan base online, this, crucially, will be the first time anyone can read the novel’s breathtaking ending.

The Dark Heroine follows sixth-former Violet Lee, who is swept up in a bitter feud between humans and vampires which has lasted centuries after witnessing a bloody massacre in London’s Trafalgar Square, and who becomes political prisoner to the brutally charismatic vampire prince, Kaspar Varn. Feisty, fast-paced and racy, Abigail’s maturity is breath-taking and the unfolding romance between Kaspar and Violet is utterly compelling.

I haven't been lucky enough to read the book yet, but am hoping I will get to devour this soon, watch out for a review soon!!!

Amazon LINK
Posted by District YA at 09:30