"R. H. Ragona’s Circus of Magic is the greatest circus of Ellada. Nestled among the glowing blue Penglass—remnants of a mysterious civilisation long gone—are wonders beyond the wildest imagination. It’s a place where anything seems possible, where if you close your eyes you can believe that the magic and knowledge of the vanished Chimaera is still there. It’s a place where anyone can hide.

Iphigenia Laurus, or Gene, the daughter of a noble family, is uncomfortable in corsets and crinoline, and prefers climbing trees to debutante balls. Micah Grey, a runaway living on the streets, joins the circus as an aerialist’s apprentice and soon becomes the circus’s rising star.

But Gene and Micah have balancing acts of their own to perform, and a secret in their blood that could unlock the mysteries of Ellada." taken from Goodreads 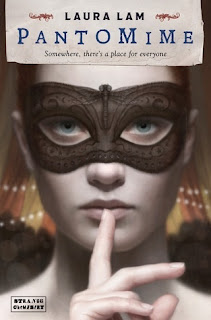 I'd been seeing the cover image for this popping up in the blogging world quite a bit and was understandably very drawn to it straight away.  I guess I did a fair bit of judging a book by its cover, as I knew I wanted to read it before I knew anything much about it.  Luckily for me the cover wasn't deceptive!!

The cover is gorgeous.  I love the vintage style image of the girl, with just the touches of colour in the background showing the circus.  I guess I hadn't thought of circus' being places filled with secrets before and the fact that the cover girl seems to be going 'Ssssh' is a fantastic little touch.

The story kicks off with two characters in two seasons (spring & summer) Its two totally different environments that I really couldn't see much to connect them, but that made the reading all the more enjoyable as I was fascinated with both landscapes.  I couldn't decide which one I wanted to read about more.

The alternating chapters / Characters are so well written and flow so well.  It kept the reading exciting.

It takes quite some time to learn what links the characters and to say I was shocked is a huge understatement.  I just didn't see it coming but also didn't expect this type of occurrence in an olde worlde setting (I love trying to be cryptic)  This also goes to prove my extreme naivety once again!!

After the link reveal I have to say that I started to feel hugely conflicted by the actions of individuals in the book.  I could totally understand why they took the actions that they did but it just didn't feel right and by this time I was so involved in the story that I felt somewhat conspiritory in what was happening.  I felt guilty and that's something I've never felt before from reading - its pretty genius!!

The conclusion to the story left my head spinning.  I actually stayed up to the early hours of the morning because I just needed to know what was going to happen.  I was shocked by some of the events and then just questioning what was happening here or what did this mean or why did this happen?  I'm just praying that a book 2 is in the works as I NEED some things filled in pronto!!!

Pantomime is a fascinating, exciting, thought provoking, colourful read that kept me intrigued for hours (especially some really boring hours at the hospital - this book was my Savior then)  Its left me dying to know more about the circus!!!

This Can Be Purchased HERE and From good book retailers
Posted by District YA at 09:30