Books That Make Me Go Oooooh (56) Everbound By Brodi Ashton 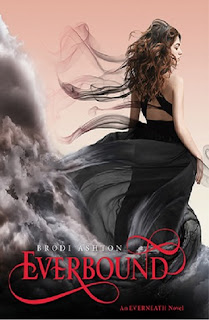 "It's been two months since the dark tunnels of the underworld came for Nikki Beckett. That night, Nikki's boyfriend, Jack, made the ultimate sacrifice and took her place in the Everneath for eternity - a debt that should have been hers. Every night Jack appears in her dreams, lost and confused, and wasting away. All Nikki wants is to save him before it's too late, but no matter how hard she tries to reach for his hand, she can never find it.
Desperate for answers, Nikki turns to Cole, the immortal bad boy who wants to make her his Queen - and the one person least likely to help. But it seems Nikki has touched his heart, and surprisingly, Cole agrees to help in the only way he can - by taking Nikki to the Everneath himself.
As they descend into the heart of the Everneath Nikki and Cole discover that their journey will be more difficult than they'd anticipated, and more deadly. Nikki vows to stop at nothing to save Jack - even if it means making an incredible sacrifice of her own…" taken from Goodreads

Ever since I read Everneath this year, I've been obsessing over when I would get to read the next part to this epic story.  I found it completely impossible to put down and read the book in just two sittings.  Just reading the blurb for book 2 and looking at the cover has me anxious for its arrival, could it go any slower???!
Posted by District YA at 09:30