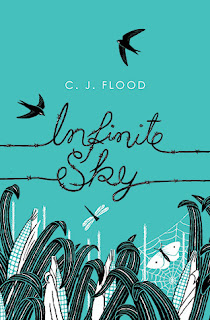 Infinite Sky By C.J. Flood
Published In The UK By Simon And Schuster
Due For Release February 2013
Amazon LINK
Goodreads LINK

"Iris Dancy’s free-spirited mum has left for Tunisia, her dad’s rarely sober and her brother’s determined to fight anyone with a pair of fists.

When a family of travellers move into the overgrown paddock overnight, her dad looks set to finally lose it. Gypsies are parasites he says, but Iris is intrigued. As her dad plans to evict the travelling family, Iris makes friends with their teenage son. Trick Deran is a bare knuckle boxer who says he’s done with fighting, but is he telling the truth?

When tools go missing from the shed, the travellers are the first suspects. Iris’s brother, Sam, warns her to stay away from Trick; he’s dangerous, but Iris can no longer blindly follow her brother’s advice. He’s got secrets of his own, and she’s not sure he can be trusted himself.

Infinite Sky is a family story about betrayal and loyalty, and love." taken from Goodreads

I have to say this is not one of my usual reads that I'm drawn to, but this one just has that something about it.  This totally has a Romeo & Juliet sound to me, but with a completely contemporary twist to it.  I'm really interested to see how it pans out!!
Posted by District YA at 09:30