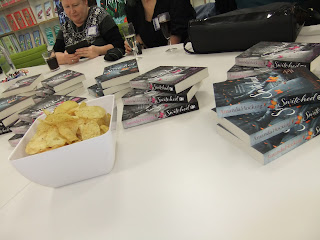 In January pretty much wherever you looked you saw posts, articles, talk of Amanda Hocking.  Unbelievably I hadn't heard of her until all this news erupted, which is seriously lame as Amanda has done something truly amazing in the literary world.
She wrote an incredible story that was proving hard to get published.  She took the amazing initiative and decided to publish her work herself.  The book world fell in love with her work and very soon after the publishers realised maybe they had been hasty in declining her writing.

Fast forward to January 2012 and Macmillan (Amanda's publishers) decided to bring her over to do lots of promo for the release of Switched and the rest of this series that will be out over the next few months.

Very unexpectedly I got a wonderful email asking if I would be interested in going along to the Macmillan offices, for a spot of dinner and the chance to meet Amanda.  I didn't have to even think about it, I was ALL IN!!! 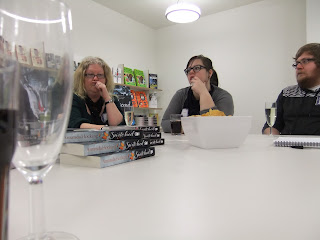 I arrived at the offices with my good friends and fellow bloggers Laura & Casey from SisterSpooky: Bookfangirl & Dark Readers.
We of course were some what early so had to sit in the foyer for a while.  This just gave us time to get even more excited and geek out over Macmillan's books.

It didn't take long and we were whisked off to the offices.  Now these offices are pretty darn cool, the walls are literally lined with all their awesome books.  Its like being a kid in a sweet shop HEAVEN!!!

All of us bloggers got acquainted or had catch ups as lots of us have met before.  We were served yummy refreshments too - the environment just got better and better.  Soon we were introduced to the lovely Amanda and her partner Eric.  Now started the chatting time.  We all sat round a huge table with our poison of choice (diet coke for me) and fancy pizza.
We all just fired questions and had general discussions about all things bookish.  I did take some notes, so here are a few points Amanda told us. 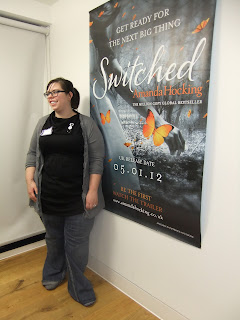 After our random chats and gossip we all got to get our books signed and had photos with Amanda.


I managed to get a gorgeous Orange copy of the book signed ready to give away to one of you lucky lot!!!  All you need to do is fill out the form at the bottom of the page EASY!!!!

Lastly I'd like to say a HUGE Thank you to Amanda for taking the time to meet us and to Chloe at Tor Macmillan for inviting me along to a wonderful event.