I found out Michelle was writing a book aimed at the young adult age range middle of last year and I was interested instantly.
Next came the book synopsis - AMAZING.  I need this book in my life, but we were still missing a cover.  The guys at Simon Pulse have been telling us a cover is coming for quite sometime.  The wait has been pretty unbearable, but finally we have our cover.........What do you think??? 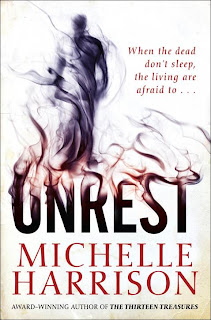 I'm really impressed with this I must say.  Its very simple, yet so effective.  I love how the shape of the boy is made up of smoke from the title.  Quite a dream like scene, which is utterly fitting with the theme of the book.
Due For Release 26th April 2012
Synopsis: "Seventeen-year-old Elliott hasn’t slept properly for months. Not since the accident that nearly killed him. Sometimes he half-wakes, paralysed, while shadowy figures move around him. Other times he is the one moving around, while his body lies asleep on the bed. His doctors say sleep paralysis and out of body experiences are harmless - but to Elliott they’re terrifying.

Convinced that his brush with death has attracted the spirit world, Elliott secures a job at a reputedly haunted museum, determined to discover the truth. There, he meets the enigmatic Ophelia. But, as she and Elliott grow closer, Elliott draws new attention from the dead. One night, during an out of body experience, Elliott returns to bed to find his body gone. Something is occupying it, something dead that wants to live again . . . and it wants Ophelia, too . . ."
Amazon LINK
Goodreads LINK