Review - The Knife Of Never Letting Go By Patrick Ness

"Todd Hewitt is the only boy in a town of men. Ever since the settlers were infected with the Noise germ, Todd can hear everything the men think, and they hear everything he thinks. Todd is just a month away from becoming a man, but in the midst of the cacophony, he knows that the town is hiding something from him -- something so awful Todd is forced to flee with only his dog, whose simple, loyal voice he hears too. With hostile men from the town in pursuit, the two stumble upon a strange and eerily silent creature: a girl. Who is she? Why wasn't she killed by the germ like all the females on New World? Propelled by Todd's gritty narration, readers are in for a white-knuckle journey in which a boy on the cusp of manhood must unlearn everything he knows in order to figure out who he truly is." From Goodreads 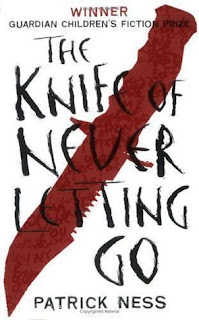 I actually read this back in January, so am relying on my 'interesting' note keeping for the review.  That said this book really packs a punch and will stick with me for years to come.

The cover is quite understated in my opinion.  Obviously the knife is the very key thing and this is really highlighted.  But I didn't feel it told me a whole lot of what to expect.

My very first thoughts of this was 'WOW this is gonna be a unique read'  This is set in a world where people are very uneducated - no books even exist anymore, likewise of women.  The population is dwindling and the last of the youth is about to reach Manhood.
When you start reading the story is littered with very intentional spelling mistakes.  People have evolved and sadly so has speech and it is gotten BAD!!  I must admit the spellings did frustrate me somewhat.  I didn't think I was a huge stickler for good grammar, but it appears I am.
Having said that though all these little touches include you in their world, so after some thought this is such a clever write.

Easily my favourite character in the book is Manchee - Todd's very faithful canine companion.  Todd's relationship with Manchee is even more enhanced by the fact that they can hear each others thoughts.  As Someone that has 5 dogs, I can tell you I would give anything to be able to talk to them.  I adore my little princesses and can only imagine the closeness I would have to them if I could understand their thoughts.  The way Todd sometimes treats Manchee though really upset me.  I can't imagine being that harsh with anyone!

This is a truly heart pounding, edge of your seat read.  I was literally so worried about some of the characters or was deeply shocked by actions, that I couldn't put it down until I had read some sort of resolution to that part of the story.

This is only the THIRD book to ever make me cry.  It really does take a lot for words to effect me that deeply and Patrick definitely accomplished that.
I felt so many emotions on finishing it - I kind of hated Patrick for the roller coaster he put me in, I was shocked, disturbed, depressed, but also wanting to know how the story is going to go from here.  Part of me just wants to read the books already, but another part of me just doesn't know if I am ready to be in THAT place again.  This should come with a reading kit - caffeine, chocolate and tissues - YOU WILL NEED THEM ALL!!!

Published In The UK By Walker