"Rhine and Gabriel have escaped the mansion. But danger is never far behind.

Running away brings Rhine and Gabriel right into a trap, in the form of a twisted carnival whose ringmistress keeps watch over a menagerie of girls. Just as Rhine uncovers what plans await her, her fortune turns again. With Gabriel at her side, Rhine travels through an environment as grim as the one she left a year ago―surroundings that mirror her own feelings of fear and hopelessness.

The Two are determined to get to Manhattan, to relative safety with Rhine's twin brother, Rowan. But the road there is long and perilous―and in a world where young woman only live to age twenty and young men die at twenty-five, time is precious. Worse still, they can't seem to elude Rhine's father-in-law, Vaughn, who is determined to bring Rhine back to the mansion… by any means necessary."  taken from goodreads 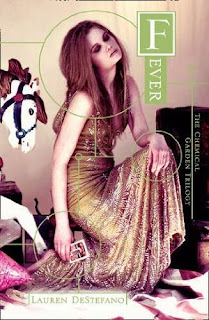 Without a doubt one of the books that captivated me the most last year was Wither, the first in the Chemical Garden trilogy.  Its started from just looking at the cover, which has to be my favourite cover in a long time.  Then the story was totally different to anything I had personally read before, it really stuck with me.  So when I knew ARCs were making the rounds for Fever the second part, I was beside myself.  I had countless twitter conversations trying to get myself a copy, that proved very fruitless until the lovely Lauren herself passed on my desperation to a fantastic American blogger, who kindly sent me her copy.  I was extatic and finished my current read as fast as I could, so I could get on to this read.  So that's how I got my copy (shortly after I got my hardback copy that I bought!!)  Now what I thought of it......

Another absolutely stunning cover.  Its not quite a gorgeous as the first, but that would be extremely hard to top.  Still I love all the little features that are highlighted by circles and actually go on to have significant meanings in the book.  It always gives me a buzz to spot the links!!

I was kind of expecting to be eased back into the story of Rhine and Gabriel - Uh uh!!!!  You are thrust straight into new dangers and horrors of this bleak new world.  I found myself feeling extremely creeped out and uneasy.  I have to say I wasn't feeling totally engaged by the new turns the book was taking and still 50 pages in, I was still not totally sold.

As the story evolves, the story shifts but gets no less sinister or freaky.  I was starting to question if the life Rhine left behind was really that bad, its funny what time between books can do to your memory as you do eventually remember Rhine had very good reason for running.

On finishing the book I felt a little disappointed that for me this book just wasn't as amazing as the first one, but this definitely had the second book syndrome in that you need to have this to get to the end, but it doesn't quite do what you want it too.
I'm so eager to read the final part to the series.  Generally on books I never want them to end, but I love the character of Rhine so much that I will kind of be pleased for her that her turmoil and strife will be over one way or another with the final instalment.  That by no means that I don't want to read more of Lauren's work - quite the opposite, I will still be her number one fan pleading her to write more!!