"Riley has always wanted to be a Demon Trapper like her father, and she's already following in his footsteps as one of the best. But it's tough being the only girl in an all-guy world, especially when three of those guys start making her life more complicated: Simon, the angelic apprentice who has heaven on his side; Beck, the tough trapper who thinks he's God's gift, and Ori, the strikingly sexy stranger who keeps turning up to save her ass.
One thing’s for sure – if she doesn’t keep her wits about her there’ll be hell to pay . . ." 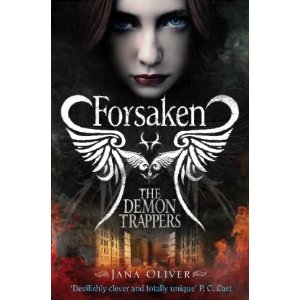 When I first saw the UK edition of the book, I wasn't particularly drawn to it I must admit.  I read a bit about it and thought it sounded my kind of thing so got a copy.  I've since seen the US edition & its kind of made me really appreciate the UK one.  I don't know what it is, it just seems warmer and better to look at.  But of course its what on the pages that matter......

I bought this a good few months ago and with my ever increasing To Be Read Pile, this just kept getting over looked.  But my good friends recommended it as a great read & they really rarely steer me wrong, so I picked this up.  I'm thrilled I finally got round to it!!

On starting this I felt it had quite a ghostbusters feel to it, but with demons instead of the ghosts.  This actually changed rather quickly and took a Supernatural (TV Show) turn.  I can't say I preferred it either way, both were very entertaining and absorbing! 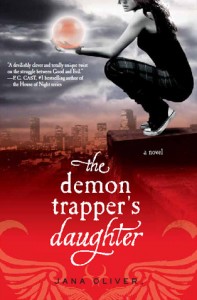 The lead character Riley shows amazing strength throughout the book, despite facing huge turmoil and heart ache.  I found her to be such an inspiring character & someone to be admired - even being a fictional character she is AMAZING!!!

Riley has 3 love interests in this book, which I felt some major jealousy over.  All 3 guys are pretty much awesome and seem to adore her which is understandable as she is awesome.  Still I would love a bit of interest from just 1 guy out there.....


This results with a rather surprise ending paving the way for the sequels, the 2nd one I'm buying on Sunday - CANNOT WAIT TO START IT!!!!!

This Is Published In The UK By Macmillan

This Can Be Purchased HERE & From Good Book Retailers
Posted by District YA at 09:00