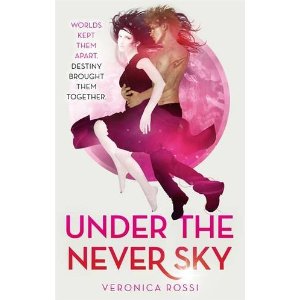 "Exiled from her comfortable home in the enclosed city of Reverie, Aria knows her chances of surviving in the outer wasteland—known as The Death Shop—are slim. In Reverie, she spent time with her friends roaming virtual environments called Realms. But in The Death Shop, even the very air she breathes can kill her. Then Aria meets an Outsider named Perry. He’s wild—a savage. He’s also her only hope for survival.

A hunter for his tribe in a merciless landscape, Perry sees Aria as sheltered and fragile—everything he would expect from a Dweller. But he also needs Aria’s help; she alone holds the key to his redemption. Opposites in nearly every way, they come together reluctantly, and embark on a journey challenged as much by their prejudices as by cannibals and wolves. Their unlikely alliance will forever change the fate of all who live UNDER THE NEVER SKY.

The first book in a captivating trilogy, Veronica Rossi’s enthralling debut sweeps you into an unforgettable adventure"

I can see me basically listing the whole of Atom's new releases here over the next few weeks.  They have some of the most exciting up coming titles and this is no exception.  This sounds a great mix of fantasy and dystopia - these books leave me saying 'Bring on 2012!!'
Posted by District YA at 10:00