"In the right dose, everything is a poison. Jessamine has spent her whole life in a cottage close to her father's apothecary garden, surrounded by medicinal plants and herbs that could kill her -- although her father has never allowed her into the most dangerous part of the grounds... the poison garden. And so she's never had reason to be afraid -- until now. Because now a newcomer has come to live with the family, a quiet but strangely attractive orphan boy named Weed. Though Weed doesn't say much in words, he has an instant talent for the apothecary's trade, seeming to possess a close bond with the plants of the garden. Soon, he and Jessamine also share a close bond. But little does Jessamine know that passion can be just as poisonous as the deadliest plants in the garden -- for behind Weed's instinctive way in the garden is a terrible secret." 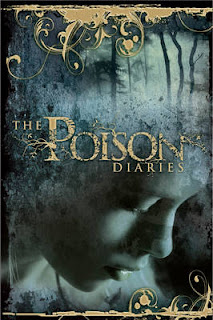 This I was very lucky to have won from Teen Today a few weeks ago.  I was mega pleased!  And even more surprised by the story - In a very good way!!!
The cover is beautiful!  I love that it has an old diary look, to go with the theme of the book.  I love the gold of the title and the small vines coming from the words.  Wonderful choosing!!

All the early chapters start with a diary entry by Jessamine.  This is a brilliant way to set the scene and get an outline of where the story is going!

The story is so well written.  You can feel the isolation of Jessamine and can imagine how sad things must be for her.  This is really highlighted on the arrival of a companion for her.

The use of real life locations is fantastic.  I'm a big fan of going see places that are used in books, films, TV.  I now have double the reason to visit Alnwick - Harry Potter & The Poison Diaries!!  I may be expecting to see some magic though - hope I won't be disappointed!!

The idea of the Poison Garden is just awesome!  I almost thought of it like Azkaban - I won't explain too much more as I don't want to give any of the plot away, but read it and see what I mean.

The story leads to quite a sad / tragic end, that I think would have made me incredibly depressed, had I not known there will be a sequel - Yep my favourite word SEQUEL!!!  I love to see stories develop and twist and turn!

All In all, I found this such a clever wonderful idea, in a historic style.  This has left me wanting more!!

This Is Published In The UK By Harper Collins Children

This Can e Purchased HERE and in good book retailers
Posted by District YA at 14:23