"In the world of ASH, fairies are an older race of people who walk the line between life and death, reality and magic. As orphaned Ash grows up, a servant in her stepmother's home, she begins to realise that her beloved mother, Elinor was very much in tune with these underworld folk, and that she herself has the power to see them too. Against the sheer misery of her stepmother's cruelty, greed and ambition in preparing her two charmless daughters for presentation at court, and hopefully Royal or aristocratic marriage, Ash  befriends one of these fairies-a mysterious, handsome man-who grants her wishes and restores hope to Ash's existence, even though she knows there will be a price to pay. But most important of all, she also meets Kaisa, a huntress employed by the king, and it is Kaisa who truly awakens Ash's desires for both love and self-respect...Ash escapes a life with her grim and self-serving stepmother and finds her beloved one...ASH is a fairy tale about possibility and recognizing the opportunities for change. From the deepest grief comes the chance for transformation" 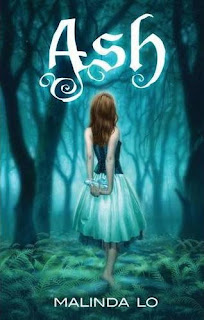 I've had this book for quite some time now, but never actually gotten round to reading it (I say that a lot I know!!)   But then in a twitter conversation with some awesome book bloggers it was mentioned that Caroline over at Portrait of A Woman was doing a Lesbian Teen Novels Week.  I realised I had never read anything that fit into the genre, but remembered I had this beauty on my shelf and so thought it was the perfect time to read it.  I'm so pleased I did - its really opened my eyes to a style that I may not have considered in the past.

The cover is just GORGEOUS!!  I love the way the girl is standing very carefree staring into the dark wild woods.  It really is like opposites working together.  The colours are mesmerising too.

So I have to admit I did find this quite difficult to get into at first.  I just couldn't warm to the characters and the story just didn't draw me much, but I persevered and I'm pleased I did.  I guess when I heard this was a take on Cinderella, I was expecting more of a carbon copy but was happy that it took its own path.  Unpredictable stories are more fun!!

Speaking of unpredictable, I found the characters quite that at times.  But that more confused me, than anything.  Some of them I just expected to react to circumstances in one way, but they would do something completely different.  Kept me on my reading toes though!!

There was one thing in this story that completely grossed me out and that was a hunting scene.  I actually had to kind of skim over it, instead of reading it properly.  It really turned my stomach.  What can I say, I am a lover of animals!!

As mentioned earlier this is in fact a lesbian love story, but it was done in such a way that it was beautiful and sweet.  There was nothing done to be risque or make a statement.  It was just a lovely tale that happened to be about two girls instead of a girl and a guy!

I did wonder if the characters may have questioned their feelings more, but at the same time it was refreshing to read of teenage girls that just knew what they wanted and kind of go for it, despite peoples possible reactions.

For me this was the perfect way to try reading another style of YA fiction, as I do love anything mythological.  Its great to work from a place of interest.
This really is a lovely tale that gets you thinking what may be considered different, just isn't!  I would highly recommend giving this a go!!

Published In The UK By Hodder Childrens Books

This Can Be Purchased HERE and at good book retailers
Posted by District YA at 18:39