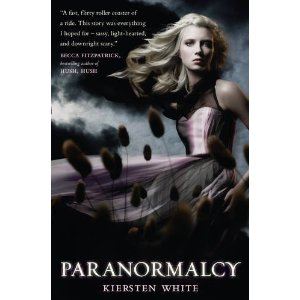 Confession Time Again....I didn't actually know what this was about when I got it & even started to read it.  I knew it was YA & must have a paranormal theme to it, just down to the name (So perceptive me!!)  This was way different to anything I could have imagined & I LIKED it!!

Again I'll start with the cover.  Absolutely stunning, really love it.  Apart from the fact that the lead character is blond & the girl on the cover is blond I don't really see any other indications as to what the book is like.  From the cover you would expect quite a dark tale & to me this really wasn't.  The story even made me giggle a few time!!

This is such a great idea for a story.  I would say the story is a cross between Buffy the Vampire Slayer & X-Files, that makes an awesome story base in my mind.

It was a little hard for me to get into at first, but mostly that is my fault for not finding out about the story first.  Once I did though, I had no problems.  It was actually really nice to read a paranormal story that was different & kind of quirky.

What I really enjoyed about the story was that Evie (the lead character) was a reluctant hero.  So many books you read, the 'heroes' are so gun ho & ready to get themselves in dangerous situations, but for once the character didn't want too.  All she wants is a normal life & I found this far more relate able than a lot of the other stories out there.  That said it doesn't mean there isn't plenty of action, because believe me LOTS happens.

Evie's love interest (yes there is still love interests) is quite unique & totally awesome.  I highly approve of him!!

This is a GREAT first book & I'm really eager to find out where this is going to go, with the sequel coming out later in the year.  I'm also thrilled to have a new series to get into!!

This Can Be Purchased Here

This Is Published In The UK By Harper Collins Children's Books
Posted by District YA at 14:51