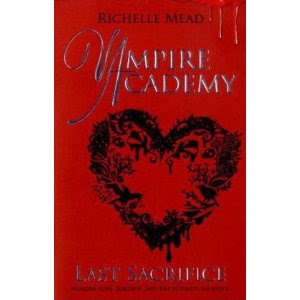 So I've been waiting for this finale for so long & to be totally honest it got a little ruined for me by the flu that I am still going on about. I just can't believe something got in the way of my reading, seriously is shocking!!

One of the first things that I wanted to talk about was the change of cover again. I was stunned that the publishers did decide to change the covers again at such a late stage. I do actually much prefer the new style, for me they say a lot more than just looking at a girls face. I find the patterns they have picked to be beautiful & I love looking to see what other things I can spot. It is unfortunate now that my books no longer match, oh well its whats inside that counts!!!

This book needed to tie up a lot of ends & I had no idea how Richelle was going to manage it. She really had woven such a complicated messy web, but obviously Richelle is hugely talented & my wonders were wasted, she knew exactly what she was doing and where she wanted the story to go, it did take a while to get there though.


I really do feel that story took me through just about every emotion I could go through, highs & lows, tears & laughs but where I ended was with a fully rounded conclusion and a feeling of contentment. We were given a great end to story & am so grateful to Richelle for the ride.

Now I'm eagerly awaiting the spin off series, which cannot come soon enough. I hear there will be a few characters making the jump from this series to the next. Its going to be exciting stuff......

Published In The UK By Puffin
Posted by District YA at 20:00