Books That Make Me Go Oooooh (15) Fateful By Claudia Gray 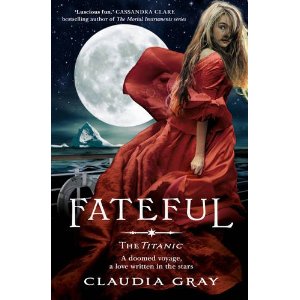 
"A tragic tale about falling in love on the world’s most infamous ill-fated sea voyage as heroine, Tess, discovers darker secrets that lie beneath the doomed crossing… and a hidden brotherhood that threaten to tear her lover from her forever.
The RMS Titanic is the most luxurious ship ever built, but for eighteen-year-old Tess Davies it’s a prison. Travelling as a maid for the family she has served for years, Tess is trapped in their employ amid painful memories and family secrets.
When she meets Alec, a handsome upper class passenger, Tess falls helplessly in love. But Alec has secrets of his own… and soon Tess is entangled in a dangerous game. A sinister brotherhood that will do anything to induct Alec into their mystical order has followed him onboard. And Tess is now their most powerful pawn.
Tess and Alec fight the dark forces threatening to tear them apart, never realising that they will have to face an even greater peril before the journey is over…"

For many years now I have had quite, shall I say morbid fascination with the Titanic.   The whole idea of this stunning ship that was supposedly unsinkable, meeting its demise on its very first journey is absolutely amazing & ironic.  Now to add in Claudia Gray's fabulous imagination and some paranormal twists, makes for an even more exciting and intriguing tale.  This really is right up my street!!!!
Posted by District YA at 15:42