"Jackson Meyer is hiding a secret. He can time-travel. But he doesn't know how he does it, how to control it or what it means. When Jackson, and his girlfriend Holly, find themselves in fatal danger, Jackson panics and catapults himself two years into his past, further than he's ever managed before, and this time he can't find a way back to the future. All the rules of time-travel he's experienced so far have been broken and Jackson has no choice but to pretend to be his younger self whilst he figures out a solution. Jackson is tearing himself apart with guilt and frustration, wondering if Holly survived. He's also become the target of an unknown enemy force and it seems even his dad is lying to him. Jackson is racing against time to save the girl he loves, but to do that he must first discover the truth about his family and himself. And stay alive." 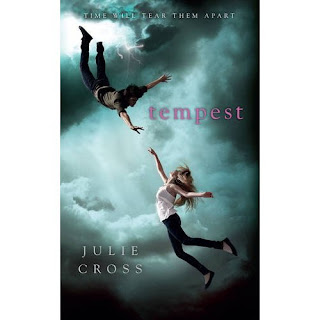 I'd not heard of this book this book till last October.  I was at a Becca Fitzpatrick talk and someone asked why she decided to change the name of her book from Tempest to Silence.  She was very happy to tell us that a new author was releasing a book of the same name & was asked if there was the chance her title could be changed.  Becca being the sweetest person ever seemed to be happy to do that, awww!!
My interest was caught already and so my hunt began for the book.

The cover is just gorgeous.  Strangely it is kind of similar looking to Becca Fitzpatrick's first book Hush Hush, which is also a stunner.  I do love the addition of a girl to this.  And just the way they are reaching for each other.  Its beautiful and so fitting with the story.

I was so quickly drawn into this story, although it did take quite some getting used to reading from a boys point of view.  Not that anything too smutty or inappropriate was said at all, but it just felt strange for me to put myself in Jackson's place and read his feelings for Holly.  I very quickly got used to this and my head adapted to the role change.  Its definitely made me more understanding of how it could be difficult for a guy to read from a girls point of view.  But its great too, as it makes you look at things from another perspective - something we should all do from time to time.

One huge thing I noticed with this book is that it needs your full attention.  The speech and the story can be quite jumpy and you can feel a little confused sometimes.  It just made me want to immerse myself in the story more and forget my surroundings.  It certainly keeps you on your toes.

There were some scenes in the book that were very poignant and touching for me & I would imagine many readers out there.  It absolutely had me wondering what would I do if I got the chance to go back and speak to people that are no longer here.  I also realised how heartbreaking it would be too.  It is so thought provoking.

Without a doubt this had a young adult 'Time Travellers Wife' feel to it, with a secret agent twist to it.   Its a winning formula I have to say.  I'm so excited for the next part to this amazing debut!!!

Published In The UK By Macmillan

This Can Be Purchased HERE and from good book retailers