Guest Post - Kirsty Murray INDIA DARK Where Did The Idea Come From? AND GIVEAWAY

I heard about Kirsty Murray's Book 'India Dark' towards the end of last year.  To me it had the most fascinating plot, real history, Performing children, exotic locations and mystery.  I couldn't help wondering where the ideas for this story could stem from, so when the people at Templar gave me the opportunity to ask Kirsty just that I had to take them up on it....... 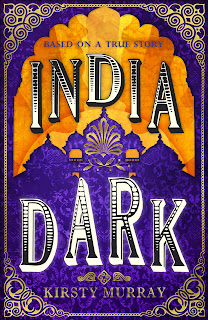 District YA – Where did the idea for the book come from?

India Dark is based on a true story. In July 1909, twenty-nine children, members of a theatre troupe called Pollard’s Lilliputian Opera Company, boarded a steamship in Australia to begin a two-year world tour.  Eight months later, the tour ended in scandal in South India when twenty-four of the children walked out on their manager, refusing to travel or work with him ever again. The novel closely follows the true history of that tour..
I first came across the story of the Pollards’ in 2001 when I was working on my novel Bridie’s Fire. In that book, the main character, Bridie, joins a tent theatre  company on the Australian goldfields. I did a lot of research on early Australian theatre companies so I could write Bridie’s story, including interviewing a theatre historian and archivist called Peter Freund who works at Her Majesty’s theatre in Ballarat (on the Victorian goldfields) At the end of the interview, Peter opened a drawer in his desk and drew out an essay entitled ‘Children Half Price – An account of the demise of Pollard’s Lilliputian Opera Company.’ “Someone,” he said “Should write a children’s book about these kids.”

I don’t think Peter had read a lot of children’s fiction because the true history was way too dark and sexy to be an ordinary children’s novel. In a couple of thousand words, his essay outlined a true story that I would later spend years researching, sweating over and eventually turning into an 80,000 word YA novel.

Piecing the story of the Pollards together was like assembling a jigsaw puzzle where half the pieces were missing. Unbelievably, there are almost no secondary sources (history books) about the Empire theatre circuit in Asia. From the 18th Century, British and later Australian theatre troupes toured every corner of the British Empire. When I first heard about the Pollard’s, I thought they must have been unique. But as I began to study some of the primary sources (newspapers and theatre magazines) I discovered the Pollards were only following the example of countless other performers and theatre companies. There were dozens of troupes that toured British territories in Asia, India and South Africa. It was a lucrative route for many companies as audiences in colonial outposts were hungry for European, British and English-speaking entertainers. Australian companies were particularly keen on touring South Asia as it was so close to home. Not every troupe was made up exclusively of children but child troupes were economical to tour as the children’s wages were low and the kids were also cheaper to feed, house and theoretically easier to control.
Poesy Swift and Tilly Sweetrick, the narrators in India Dark, are wholly invented characters though much of what they say and do is based on the experiences of real girls who were members of the Pollard’s troupe.  I decided to ficitonalise the story – to change the names of the players and the troupe - because I knew I could never be sure of every detail to be able to confidently declare it straight ‘fact’.  There were so many conflicting versions reported in the press of what exactly happened during the eight months the kids toured Asia. Even the number of children involved was complicated. Twenty-nine left Melbourne but three disappeared en route.

In the end, fiction is the most powerful way to tell the truth about people’s lives.

I'd love to say a huge Thank you to Kirsty for writing this post and to Templar for giving me the chance to ask my question.


You can find my review of India Dark HERE


Templar have Kindly Offered to give one of you guys a copy of the book!!  All you have to do is fill out the form below - Good Luck!!
Posted by District YA at 10:00