I was very fortunate enough to meet the wonderful author of 'Night School' C.J. Daugherty or Christi as we became to know her at Atoms bloggers event back in November.  Let me tell you she is one of the nicest people I have had the privilege to meet.
Shortly after our meeting Atom asked if I would like a guest post from Christi on my blog.  My answer - HELL YEAH!!!  So this is what we agreed on - Hope You ENJOY!!! 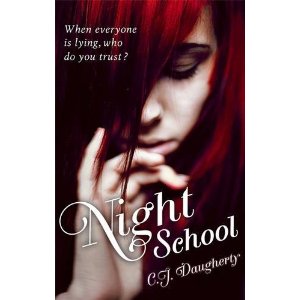 Fun with pretend schools By C.J. Daugherty
I find books and films with school settings irresistible. There’s something wonderful about places where kids outnumber the adults in an enclosed environment. It’s like you can sense a low-grade anarchy simmering just below the surface.
Or was that just my school?
Given all of that, when I sat down to write my first novel, what other setting could I possibly choose?
Here are the books, films and TV shows set in schools that most influenced me when I started writing.
Buffy the Vampire Slayer (TV series)
Oh Buffy (and Willow and Spike)… How I love thee. There’s not much to say about this series that you don’t know already, so I’ll just say that I was influenced by all of it. It’s funny, charming, quick and brutal. Every piece of dialogue Joss Whedon writes is a masterclass for authors. When I need dialogue inspiration, I turn on some Buffy and just absorb the world he creates.
My So-Called Life (TV series)
The short-lived TV series that introduced a teenage Claire Danes to the world, MSCL was the first to look frankly at the world inhabited by ordinary fifteen-year-olds. It also embraced their halting, sometimes wonderfully weird speech patterns, their complex relationships and loyal friendships. It was slow moving, frustrating, funny and beautiful.
Fallen, by Lauren Kate (Book series)
Set amid a world of humans and angels, the first book in this series by Lauren Kate takes place in a beautifully described reform school called Sword and Cross. I loved the world that Kate created – I could get completely lost in it. I was reading this when I first started thinking about creating a school world of my own, and a couple of astute readers have noticed a tiny touch of the Sword and Cross moodiness in my writing.
Twilight, by Stephenie Meyer (Book series)
I think Stephanie Myers captures the awkward transition young people have to deal with when transferring into a new school where everybody already knows each other. I had to do exactly that as a teenager. Those first months when you don’t really know what anybody else is talking about are brutal -- but also kind of thrilling. That sense of being the outsider was something I used a lot in Night School.
Vampire Diaries (TV series)
I’m addicted to this series set in an American high school populated with vampires, werewolves and witches. I particularly like the characters who are meant to be bad, especially Damon, Katherine, and Klaus. The writing is so well nuanced that, even when they do horrible things, they’re also charming and funny so you like them anyway. And, as a writer, let me tell you. That? Is REALLY hard to do.
Pump up the Volume (film)
Oh, I might as well just admit it -- I love a rebel. Christian Slater stars in this raucous film about a shy new kid at a high school (spot the theme!) in a suburban neighbourhood. He likes the kind of alternative art, music and books you don’t get in shiny suburbs, so he runs a pirate radio station to spread the word to the locals about all they’re missing. So they try to arrest him. It’s genius. And the soundtrack is wicked.
Freaks and Geeks (TV series)
This short-lived US TV series set in an American high school comes closer than any other ever has to my own real school experiences. Its honesty is sometimes painful to watch but it’s also quite touching. And the clever main character who pretends to be less intelligent in order to make cooler friends? That was totally me.
Heathers (Film)
More Christian Slater! This 1980s art-house film about snobby girls in a high school (all of whom are named Heather), and the dark and dreadful things that happen to them courtesy of Slater and Winona Ryder is both baffling and wonderful. Its dark, subversive humour is a huge influence on me.
Breakfast Club
I can sing every song on the soundtrack to this 1980s movie set in a high school on a Saturday when a group of students who don’t know each other are serving an all-day detention sentence. Thrown together, the popular girl, geeky boy, creepy girl, athlete and loser are forced to talk to each other for the first time, and they kind of fall in love with each other. I adore this film.
Say Anything
John Cusack, Ione Skye and that guy who played Frasier’s dad star in this classic romantic comedy that just kills me. Fast-talking Lloyd Dobler does poorly in school but is in love with beautiful super genius Diane Court. She’s not at all interested in him despite the fact that he’s JOHN CUSACK. And then there’s this scene *sniffle* where he holds this boombox above his head *grabs tissue* and plays a love song… *SOBS*  Anyway. You have to watch it. It’s awesome.
Thanks Christi for such a wonderful post.  I LOVE 95% of these and the others I am going to buy immediately - Thanks for the tip!!!
You can my review of Night School HERE
Posted by District YA at 09:00