As this is a review for the third book from a series spoilers are possible!!!

"For the Young, Fabulous and Fanged...All is never what it seems. Schuyler Van Alen's blood legacy has just been called into question: is the young vampire in fact a Blue Blood, or is it the sinister Silver Blood that runs through her veins? As controversy swirls, Schuyler is left stranded in the Force household, trapped under the same roof as her cunning nemesis, Mimi Force, and her forbidden crush, Jack Force. But when an ancient place of power is threatened in Rio de Janeiro, the Blue Bloods need Schuyler on their side. The stakes are high, the battle is bloody; and through it all Schuyler is torn between duty and passion, love and freedom." 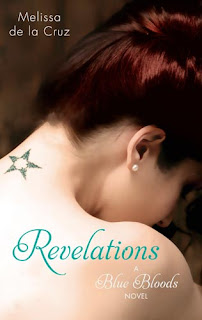 Once again I am loving this cover.  The UK designers made some slight tweaks to the US version and I think they were perfect.  It does take a while to understand the relevance of the cover, but it is there.

This is the third book in the Blue Bloods series and is once again a treat.  Melissa has a wonderful way of building a nicely paced story, which is intriguing and fun to read.

Melissa adds quite a few pop culture references which make the book very current & adds a whole other connection to the book.  When the characters talk of famous people that you know it kind of puts you on parr with them and shows that you are looking up to the same people.  But what Melissa did very cleverly was mentioning people that are somewhat in the paranormal / fandom bubble and so shouldn't really become people that readers won't know in the future giving the series more longevity.  I was particularly excited to see a mention of Rob Zombie.  Made me think of a few friends of mine that love him!!!

This book continues the love triangle of characters Schuyler, Jack & Mimi.  And I have to say this is growing into quite a beautiful tale.  I even felt myself feeling some sympathy for Mimi, the character we love to hate in the series.  But I'm pleased to say that didn't last too long.  I really do love to hate her!!!

The book leads to quite a huge revelation as the title of the book suggests.  I was rather stunned by it, which is pretty fantastic.  This is an amazing addition to the Blue Bloods series & highly recommended to all you vampire fans!!

Published In The UK By ATOM

This Can Be Purchased HERE and at good book retailers
Posted by District YA at 17:31