"A prodigal son. A dangerous love. Haunted yearning...Grace Divine, daughter of the local pastor, always knew something terrible happened the night Daniel Kalbi disappeared and her brother Jude came home covered in his own blood. Now that Daniel's returned, Grace must choose between her growing attraction to him and her loyalty to her brother. As Grace gets closer to Daniel, she learns the truth about that mysterious night and how to save the ones she loves, but it might cost her the one thing she cherishes most: her soul." 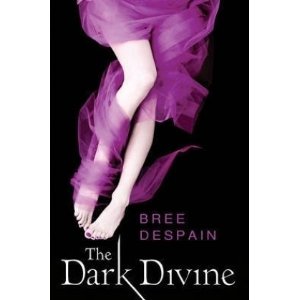 I've been wanting to read this for some time now, but firstly never got round to purchasing it.  Then I found it in a charity shop and it would have been a crime to leave it on the shelf.  Then its been sat on my to be read pile for ages & a couple of weeks ago I picked up the sequel to this, so just thought lets get this started.  I'm glad I did!!!

This has a really beautiful eye-catching cover.  I'm not entirely sure why, but this just screams paranormal to me and I love it.  As I've said in other posts I really don't like seeing models faces on covers, so the lack of pleases me no end!!  The use of the colour purple is amazing too & does come up in the book, so it was a connection I was glad of.

The first thing that I really connected with in this book was the kind of brother envy.  Everyone loves Graces brother Jude and I have exactly the same with mine.  Hell I adore my brother too, but sometimes its just a little heartbreaking when your friends ask where your brother is & whats he up too?  Also how perfect he is.  Its hard enough for us girls to be up to scratch sometimes and these perfect brothers just show us up.
All that aside though, you pick up what a happy family Grace comes from & what a solid unit they are.  It makes you think they are kind of unbreakable which is not entirely accurate.

The book kicks straight off with an unraveling mystery.  I did feel like I was watching Lost again as just when you felt a question might get answered you'd be left with another.  However the mystery's to unravel, all be it slowly but they do very satisfactorily.  I really did enjoy the building of the story.  And this leads well into a heart rending revelation.  Something that actually made me feel quite sad.  It was so clever and beautiful, always a thumbs up from me.

I found having this set with a religious family quite interesting and different.  Paranormal stories don't always go with religion but this did it well.  It was fascinating seeing how the community react.

The conclusion to the story was well formed.  It answered everything I wanted to know and gave me a few sharp shocks.  There was also plenty of room left for the sequel which I am so excited to get started on in the near future.

This Is Published In The UK By Egmont Books

This Can be purchased HERE and at all good book stores
Posted by District YA at 09:37