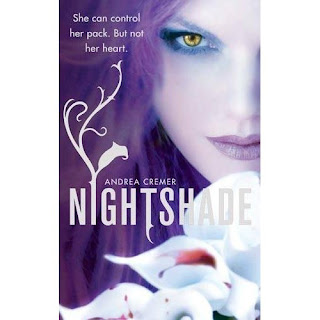 This year I got so lucky - my brother took me to San Diego comic con - I have always wanted to go & was expecting the different TV stations & movie makers to be there. What I didn't expect was that there would be publishers. It really was a heavenly few days for me.
Well in the end I spent a lot of my time with the publishers & was luckily given a few ARCs. Nightshade was one of them. It was a book I hadn't actually heard of. I read the blurb & saw the words werewolves & that got my interest immediately!
Well just about 3 weeks ago I still hadn't got round to reading this & my friend Krystal, asked if I had it & if so read it immediately. Well I am not one, to not do what I am told!! I started reading this the next day!

I was instantly gripped!!!
I found Calla to be a wonderful lead & was so eager to know what she would do next, although at times I felt like shouting at her 'NO DON'T DO IT!!' These female characters make me realise how safe I live my life!!!

Calla has two guys that a fighting for her attention - Ren & Shay. Very different names, but memorable, I like it when things are different.
They are both great characters, but I personally wasn't drawn to either one of them, so there was no teaming for me on this story.
I did find both the guys to be very pushy & I have to admit, this was something I was not 100% comfortable with. I'm not saying they are bad guys at all, just that especially in the beginning of the book they are quite demanding. I think there is some redemption as the story goes on though.

I loved Andrea's use of pop culture references. Two of my favorites have to be a reference to Voldermort & Dark Horse Comics - this made me so geekily excited, I even tweeted my friend my excitement!!

I really enjoyed reading about the wolf packs & how Andrea used facts of animal packs & worked it in to the story. The characters acted how I would imagine they would & it was fascinating for me.
Another fascinating aspect for me was the fact that the packs had 'masters' It really made me think of Victorian style stories, with the characters doing as they were told & living to serve. Its something you don't expect to read of in modern set books & so was quite an appealing change.

The book has twists and turns you wouldn't believe. It had me gripped from the word go! I'm desperate to read the next installment & really do hope it picks up from the cliffhanger end!!!

This Is Published in the UK By Atom Books
Posted by District YA at 15:27