"'R' is a zombie. He has no name, no memories, and no pulse, but he has dreams. He is a little different from his fellow Dead. Amongst the ruins of an abandoned city, R meets a girl. Her name is Julie and she is the opposite of everything he knows - warm and bright and very much alive, she is a blast of colour in a dreary grey landscape. For reasons he can't understand, R chooses to save Julie instead of eating her, and a tense yet strangely tender relationship begins. This has never happened before. It breaks the rules and defies logic, but R is no longer content with life in the grave. He wants to breathe again, he wants to live, and Julie wants to help him. But their grim, rotting world won't be changed without a fight..." taken from goodreads 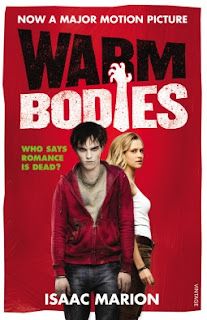 I've been intrigued by this book for ages, but with the amount of amazing books out there its one that I hadn't gotten round to reading.  When I found out the book was being adapted into a movie, I found it the push I needed to actually read it.

I can't say I've read many zombie themed books, making my reading experience fairly fresh and new.  Obviously I expected dead, flesh eating creatures but other than that I wasn't sure how the book would pan out.

I loved the idea of this kind of being a Romeo and Juliet reworking in a totally new setting.  R somehow decides he doesn't like his zombie life anymore and wants to live.  With the help of living girl Julie, they try to make it work.  Its a brilliant concept but I have to say I just didn't get how this would come about.  I didn't see that a living person would find any attraction to or understanding of a living dead person, especially knowing and seeing what these people are capable of.  Actually writing that makes me feel somewhat racist against the zombies and I actually feel guilty.  I think that is one of the things that make this book great - it makes you think.  It definitely made me think of a post apocalyptic world and how we would cope.  It made me think of inbuilt prejudice that came quite easily to me, which I do regret.

The more you learn of R and Julie, the more you are drawn to both of their characters and their relationship.  I felt I judged them way to early and although it seemed impossible to me, they actually built an incredible relationship that was not only clever, but kind of beautiful too.

The conclusion was more than I could have hoped for.  I can't say I 100% know how things happened in the way they did, but I can say that I did enjoy it.  I think it would be quite interesting to read a companion story that maybe went into what happened some time after, on a more wide spread scale.

Published In The UK By Vintage Books

This Can Be Purchased HERE and from good book sellers
Posted by District YA at 10:00