As This Is A Sequel Some Spoilers Are Possible 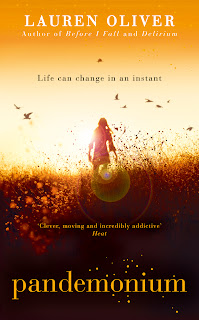 I've been extremely excited for the sequel to Delirium, since devouring it last year.  I'd never considered what a world without love would be like till reading that and it literally had me thinking about it ever since.

The UK cover is beautiful.  It is quite fitting with the location of much of the book.  However I was slightly disappointed that it was so different to the first cover.  I do like to have some sort of theme that runs through and couldn't see it with this.

On starting the book I was astonished to find where I was in the story.  Quite some time has passed and things have evolved vastly, which just made me eager to read on and find out what has happened.

You find out that the book alternates between two times, just after the last book and sometime in the future.  The shifting between the two times made me more and more curious as to how things could change so much, but like I said it makes you want to read faster to try and find out whats, what.

At times I found the descriptions of 'then' to be somewhat over descriptive.  I felt I just wanted to read about the characters and wasn't so excited to read about what was surrounding them.  This possibly is somewhat down to me being impatient and just wanting to know everything already.

I found reading about the struggles of the 'wild' very hard to comprehend.  I even started to question if the life Lena had before was THAT bad.  You realise what they are fighting for is worth it and hopefully in the same position people would fight for the same.

Pandemonium was completely different to Delirium and so not at all what I was expecting.  As I had certain expectations, I didn't find it quite as enjoyable as I thought I would.  That said I was really engrossed with the end and am extremely eager to read the finale and see how it all ends!

Published in the UK By Hodder And Stoughton

This Can Be Purchased HERE and at all good book retailers
Posted by District YA at 10:00