Warning Spoilers Possible!
"Against all odds, Katniss Everdeen has survived the Hunger Games twice. But now that she's made it out of the bloody arena alive, she's still not safe. The Capitol is angry. The Capitol wants revenge... The thrilling final instalment of this ground-breaking trilogy promises to be one of the most talked-about books of the year." 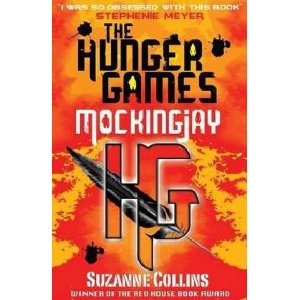 I'd already heard some very mixed reviews for Mockingjay and with my just finishing Catching Fire, I was eager to read the finale and know what everyone was talking about, but mostly deciding for myself what my opinions were.  There were aspects that I LOVED, but there were also a few things that I was very unsure of.  I'll explain all shortly.

The cover is brilliant, I love the fiery colour of it.  For me it shouts all what Katniss is about & her role in the book.  Once again I think this would be equally appealing to boys and girls, which is fantastic.  Getting people into reading is so important, and I really do think covers can have a great impact.


Once again this kicks off, shortly after where the previous book left off.  All the blanks are quickly filled in, and you feel ready to get on with the story.  One thing I some times get bored of in books, is the way that the back story can be repeated a lot, which in some instances is necessary, sometimes not so much.  For me this book had the perfect balance & I didn't find my mind wandering at all.

Very early on in the story I felt myself questioning whether district 13 were any better than the capitol.  I'm not sure if this was completely intentional but it was a big indicator for how the story would evolve, for me anyway.  That said they Suzanne once again managed to pull off some amazing twists and turns, that I never saw coming.  Her mind is truly fantastic!!

Relative newcomers to the story Annie & Finnick - I ADORE them!!  They have the cutest relationship ever!  I just pray one day I am lucky enough to find my own Finnick!!
Also the revelations of Finnick's past absolutely shocked me (once again!)  I don't know why I didn't see it, but I absolutely didn't.  I was left aghast again as these books have managed to leave me every time!

Towards the end of the book is when I began to feel a little unsure and maybe not how I wanted the book to go.  I felt we were left out of the BIG part of the story where the book was heading to & it did make me disappointed.  I really wanted to see how our group of heroes were going to get to Snow, but as I say this didn't actually happen.  But it was explained so we do still have an idea of the events that happened.

Then as the story seems to be going to a close we get yet another twist, which as I have said before and will say again left me absolutely shocked!  I most definitely didn't see this happening!

The story then goes in what I can only say is a pretty depressing road.  Its understandable, but dark reading at the same time.

The whole love triangle finally gets resolved and I have to say I would absolutely have made the same choice as Katniss.  I'm actually going to be unpopular with some of my friends over this fact, but my choice was obviously the same as Collins and so must be the right choice *GRIN*

You get the end of the story and then there is an Epilogue - uh oh!  I really don't like Epilogues very much.  For me the story was ended fairly perfectly on the last words of the last page & then you get this whole load of other information that I didn't feel was needed.  But it in no way ruins the story or makes the story less enjoyable, I just felt it wasn't needed.

Overall I thoroughly enjoyed the book & am happy with the resolution of the story.  The whole series was addictive reading and this was no different at all.  I really do urge everyone to give these a go!!!

Published In The UK By Scholastic

This can be purchased HERE and in all Good Bookstores
Posted by District YA at 16:03